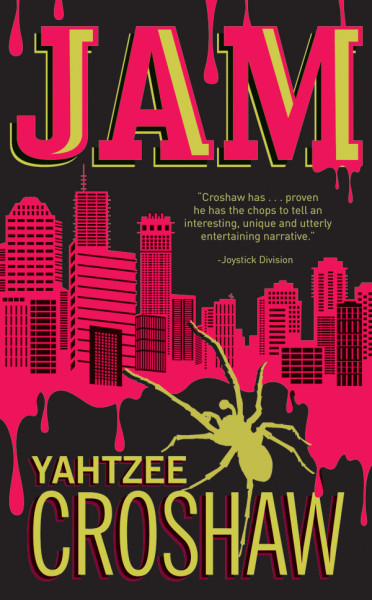 I'll admit it, there was one overriding reason why I chose to read this book: I love Croshaw's weekly video game reviews for The Escapist. They are so good that I read them even though I very rarely actually play any of the games he reviews. In fact, I have never even played the game for what I consider the greatest video game review ever written. To be fair, that has a lot to do with the fact that Croshaw panned the game in question. However, if it had been a laudatory review, I may very well have purchased it based on his review alone.

Given the amount of joy I've gotten from his reviews, it felt like I absolutely, positively read one of his novels. Sadly, I didn't enjoy his second novel as much as I enjoyed his non-fiction writing. To be fair, that was an awfully high bar to clear. In the end, I liked Jam well enough -- a pleasantly diverting, apocalyptic near-future story about a handful of Australians attempting to survive when a strawberry-scented, amoebic lifeform devours all carbon-based life and objects in Brisbane. Croshaw's brand of humor was evident throughout and the characters were certainly amusing. However, the book as a whole was about as filling as, well, a strawberry sandwich on Wonder bread. Reader reviews on Amazon suggest that I should've started off with his first novel, Mogworld. However, while I enjoy the occasional run-in with comic fantasy (a genre Jam more closely aligns with than apocalyptic fiction), it may be a while before I seek out that first novel. Nothing against Croshaw, it's just that there's a lot of comic fantasy out there, and I may want to see if another author makes a better go of it.
Collapse